Christmas treats are often all about cakes or cookies, but today’s recipe is one from that forgotten part of the baking world…Christmas pastries!

I’ve been making joulutorttu, which are traditional star plum pastries from Finland (yes, Finnish baking is getting a double-feature this year). If you think that name is a mouthful, they are also called tähtitorttu, which means star pastries. Those names really are enough to make you give up and reach for more mulled wine…

The traditional way to make these pastries is with plum jam or prune filling. I had a look in my cupboards at home, and while I have plenty of jars of jam, I’m lacking anything made with plums. I went for the next best thing – a jar of blueberry jam, which I reasoned was suitably Nordic to be able to pass off as vaguely authentic. I also made some prune filling as a test – I just chopped up some prunes, then cooked them with water, cinnamon, orange juice and some brandy. In the first picture, I’ve used the jam in the top and bottom rows, and the prune filling in the middle row – you can see the different textures. 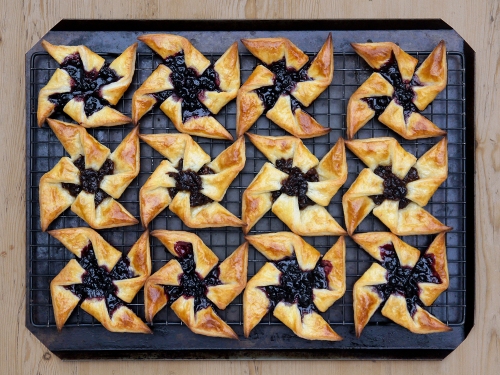 There are actually a few different ways to make these little guys. If you are feeling lazy, or are busy, or have pets/small children, then it is quite acceptable to buy a sheet of puff pastry and use that as the basis for the stars. Just be sure to make good, clean cuts so that you get lots of puffing at the edges.

I, of course, opted for a more challenging version. I’ve used a pastry recipe from the Nordic Bakery cookbook. It suggests using a really rich pastry that is made with a decadent amount of butter plus the same amount of quark to bring it all together. I’ve never worked with a pastry like that, so I wanted to give it a go. However, I didn’t have quark to hand, and being too lazy to make the short walk to the main street, I swapped it for some skyr. This is a high-protein and low-fat type of yoghurt which originates in Iceland (and those Icelanders take it very seriously, swearing that the stuff you get in Britain isn’t anywhere near as good as the real thing…well, I like the stuff here just fine, and it worked in my recipe!).

The dough is very soft, and at first I thought it would not work. But I wanted to believe, so I assumed the flour would soak up some of the moisture, and after chilling it overnight, the pastry was indeed perfectly workable. It rolled out easily, and it was straightforward to cut and form into those classic windmill shapes.

Now, the real magic was in the baking. The pastry? Just wonderful. As it has a high butter content (made with equal weights of butter, skyr and flour), it is rich, soft and has a lovely deep golden colour. It is definitely worth the effort of making it yourself. But I do have to warn you – it is a funny dough too. I made my twelve stars from the first rolling of the dough, and they worked perfectly. I then gathered up the scraps and made some more…and boy did they go haywire! It might have been due to the pastry on the first batches being comparatively cool, whereas the later batch was a bit warmer, but they puffed up extravagantly, almost like puff pastry, but they also struggled to bake properly without getting too dark. To avoid this, I recommend working with the dough in two batches, and in each case roll the dough out as square as you are able, so that you minimise any offcuts and can avoid re-rolling the dough.

Of my two flavour choices, the spiced prune was nice, but I loved the blueberry. I would happily make that flavour again. If you are making a large batch, you can also use various different flavours – plum is traditional, but apple and cinnamon would work well, and I think something sharp like raspberry would be delicious too.

All in all, these Christmas stars from the north were a great success. They are incredibly more-ish. I think I wolfed down three of them in fairly quick succession. They are also at their most delicious while still fresh. They will keep for a couple of days in a tin, but I don’t think you want to delay eating them, and frankly – they taste so good I don’t think you’ll have many hanging around for long. 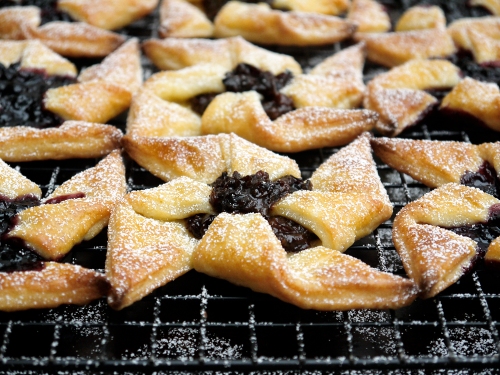 • jam or marmalade (or see my prune recipe below)
• 1 egg, beaten
• icing sugar, to finish

1. Make the dough. Mix the butter and quark/skyr. Add the rest of the ingredients and mix until it comes together in a dough – the dough will seem very soft. Wrap in cling film and leave to chill overnight.

3. Sprinkle a worktop with flour, then roll out the dough thinly – no more than 5mm. Try to get as square a shape as you can. Cut out squares of 10cm x 10cm. Transfer each to the greaseproof paper, leaving some space between the pieces.

4. Make a small diagonal cut about one-third  towards the centre of the square from each corner, but do not go all the way. Add a spoonful of jam in the centre, then starting at the top, bring the top-right piece into the centre. Repeat on each side to build up the windmill effect. Secure the overlapping dough in the centre with some water and pinch together, then push down and add a dab more jam to cover. Repeat until you have a full tray (I baked them in batches of 4).

5. Brush each pastry with the beaten egg, then bake for around 8 minutes until a rich golden colour, turning after 4 minutes to get an even bake.

6. When done, remove from the oven, and leave to cool for a few minutes on the paper. Transfer to a wire rack to cool, then dust with icing sugar before serving.

To make plum filling: finely chop 100g of prunes. Add 150ml water and a large pinch of cinnamon. Bring to the boil then simmer until the mixture seems thick and almost too dry. Add a tablespoon of brandy and a tablespoon of orange juice. Mix well and leave to cool.